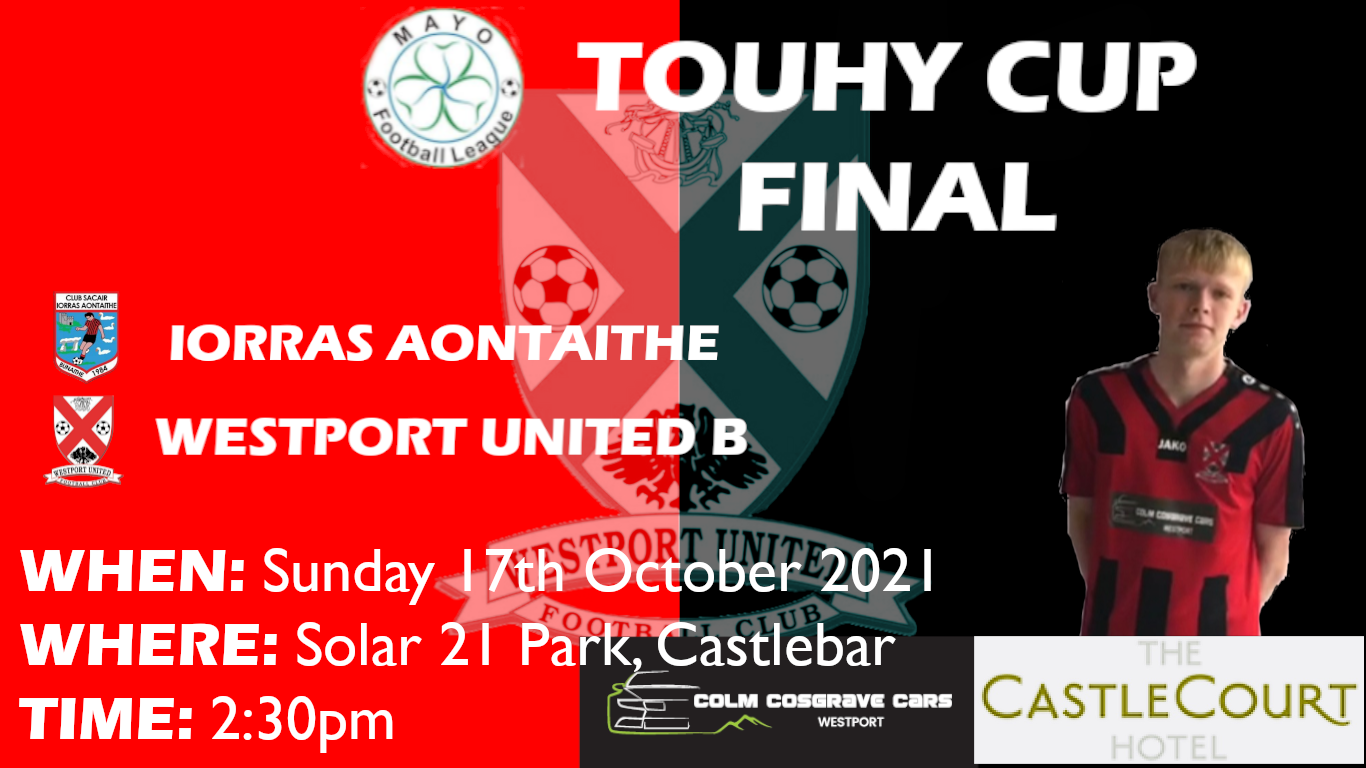 All roads lead to Solar 21 Park as Westport United B take on Iorras Aontaithe in the Touhy Cup Final tomorrow afternoon (k.o. 2:30pm).

It is the first time since 2015 that the B team are contesting the final, in which they last won the competition that year when a Mark MacNally hat trick saw off Killala 3-2 in an exciting encounter.

Westport United B only needed two games to reach the final with the opening round resulting in a 5-1 win against Snugboro United with Aaron Cannon, Mark MacNally, PJ Calvey, Oisín Ryall and an own goal being the difference between the two teams back on July 4th. Westport United B got a bye in the second round and they took on the highly-fancied Kiltimagh/Knock United in the semi final two weeks ago and they were involved in a classic. Westport went a goal down before Brandon Scahill equalised from the penalty spot but the hosts went in at half time 3-1 up. For most seasoned observers, the scoreline at that point would almost certainly be a formality but Westport United B, aided by a strong wind, turned the match on its head with Brandon Scahill getting his second and Mark MacNally coming off the bench to nick two goals for himself for Westport United B to complete an amazing comeback to win 4-3.

Iorras Aontaithe, like Westport United B, also only needed two games to reach the final; the first was a thumping 6-1 win against Manulla B followed by a bye in the second round to set up a tight, tense semi final at home to Conn Rangers, touted by many to do well in the division but hit a bad patch of form as the season progressed. Iorras won the game 2-1 after extra time to set up this enthralling game.

Both sides met in the league at United Park and Westport United B narrowly won the game 2-1 with a brace from Adam Diamond-Keane. United could have won the game comfortably that day but Iorras also felt that they could have nicked a point with some late opportunities and if Iorras bring a full squad, they will undoubtedly be tough and tricky opponents. Westport have a very good defensive record in the division but their attack at times needs to show a more ruthless streak in front of goal, a point that has been regularly made by Joe Kelly, team manager in his post match analysis after various games.

Westport United have a nice blend of future talent and experience within the squad with the likes of Oisín Ryall, Adam Diamond-Keane, Joe Sweet, Ted Horan, Cian Gill and Aaron Cannon being complimented by Ciaran Cuddy, Johnny Smith, PJ Calvey, Niall Quinn, Pádraig Folan, Micheál Gibbons, Colin McDonagh, Colin McDonell, Brandon Scahill and Mark MacNally. Gibbons, Quinn, Folan, Calvey and MacNally are all survivors of the Touhy Cup winning squad of 2015. The system that Joe Kelly and his management team has put in place has undoubtedly reaped some rewards already, but it's an ongoing project with the aim of progressing the younger players towards first team football.

Some of the B team took part in a podcast during the week and they were all looking forward to the game and were focused on the task ahead and even Westport United's previous Touhy Cup success was remembered. The podcast can be found on the club's YouTube channel, Westport United TV.

Don't forget that the match takes place in Solar 21 Park, Castlebar with kick off at 2:30pm and a large crowd is expected to get behind the B team, so make sure you don the club colours and add your voice to the sound of the crowd. If you cannot attend, the match will be streamed live with commentary by Kenneth Gannon.

It is with deep regret that Westport United FC learned of...

HASTINGS INSURANCE ACADEMY SET TO KICK OFF FOR 2022

Westport United is delighted to announce the start of th...

Westport United FC is delighted to announce that the tri...

The last two weeks has brought images to our TV screens o...

My mission in life is to be kind, compassionate, caring...